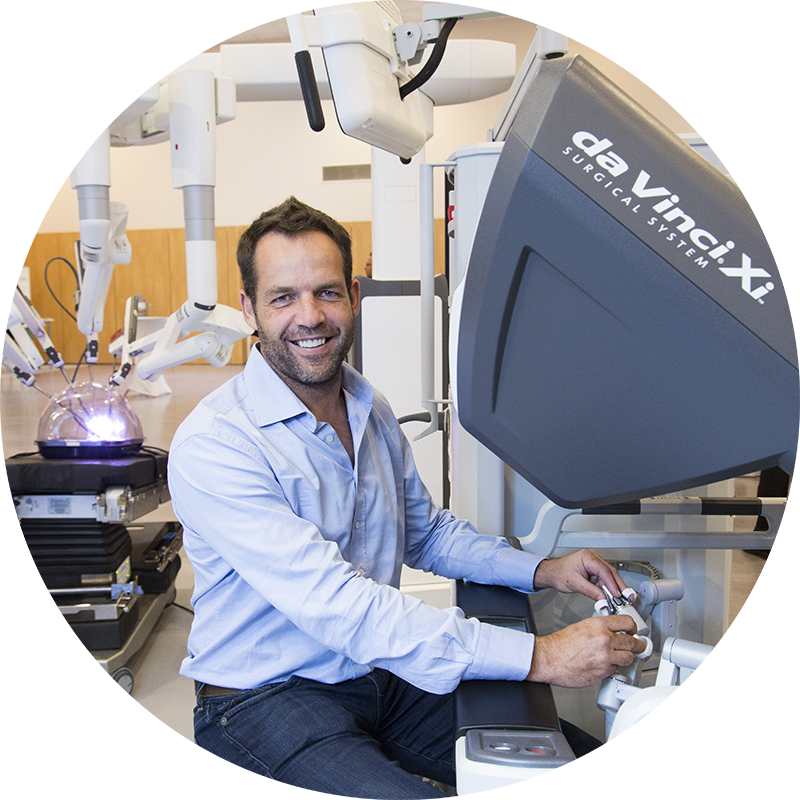 Life Kingsbury Hospital in Claremont, Cape Town has recently acquired the newest model of the da Vinci robot, the da Vinci X, as of September 2018. This is a first for South Africa and the only da Vinci robot of this nature, in the country.

What is the da Vinci X robot?

The da Vinci robotic system is a surgical system that allows the surgeon to perform minimally invasive surgery through just a few tiny incisions. Dr Moolman is exclusively using the newest and most technologically advanced da Vinci robotic system. The machine works by translating the surgeon’s hand movements into precise movements of the surgical instruments, allowing the surgeon complete control throughout the procedure with 3D digital optics. The new surgical system has a sleek new design with improved functions, better high-definition (HD), voice and laser guidance and includes a fully integrated endoscope. The arms of the new da Vinci X also provide the surgeon with a longer reach and a narrower profile to perform intricate surgery. Thus this newer model enables focused-quadrant surgery including prostatectomy, partial nephrectomy, benign hysterectomy and sacrocolpopexy.

How does it work?

Although the da Vinci X is the newest model of the da Vinci robotic system, the interface of the robotic machine is the same. Like that of the da Vinci, the da Vinci X has two sections: the tower and the console. The tower is then placed over the patient during the surgical procedure. The tower comprises of four arms, of which three hold the tiny surgical instruments, and one holds a high-definition 3D camera. The arms on the tower are controlled by a computer system, making this a robotic surgical system. This computer system then works by translating the surgeon’s hand movements into movements of the surgical tools inside the body.

The console of the robotic machine is the area in which the surgeon sits to operate the robot’s controls. The surgeon will look into a special monitor which will allow him to see a 3D view of the internal body. From the console, the surgeon is able to fully control the robot’s arms by using controls in the console area of the machine.

What are the benefits?

Because surgery performed with the da Vinci X robot is as minimally invasive as previous models, patients who undergo robotic surgery experience minimal scarring, and generally have a very quick recovery time. The risks involved with the da Vinci X robotic surgery are the same as those of the previous models in that there is generally less pain, less risk of blood loss and a largely reduced risk of infection.

The da Vinci Surgical System is powered by state-of-the-art robotic technology. The System allows surgeons hand movements to be scaled, filtered and translated into precise movements of micro-instruments within the operative site. Read More

This website uses cookies to improve your experience while you navigate through the website. Out of these, the cookies that are categorized as necessary are stored on your browser as they are essential for the working of basic functionalities of the website. We also use third-party cookies that help us analyze and understand how you use this website. These cookies will be stored in your browser only with your consent. You also have the option to opt-out of these cookies. But opting out of some of these cookies may affect your browsing experience.
Necessary Always Enabled

Performance cookies are used to understand and analyze the key performance indexes of the website which helps in delivering a better user experience for the visitors.

Analytical cookies are used to understand how visitors interact with the website. These cookies help provide information on metrics the number of visitors, bounce rate, traffic source, etc.

Advertisement cookies are used to provide visitors with relevant ads and marketing campaigns. These cookies track visitors across websites and collect information to provide customized ads.

Other uncategorized cookies are those that are being analyzed and have not been classified into a category as yet.

SAVE & ACCEPT
Schedule an Appointment